Interviews are often the backbone of videos. The statements gathered during the interview process are formed into sound bites and presented to the viewer in a creative way to tell the story.

The ideal interview setup would include a minimum of two cameras. This makes the process easier for everyone and adds production value to the final product. Shooting with two cameras can add additional cost but save time both on and off set.

When shooting with an additional camera, the editor has more options to smooth out the “umms” and flubs. The master shot is usually a medium shot from about the mid torso and up and the secondary shot is tight shot from the shoulders and up. When the interviewee starts to stumble during the middle of a sentence the editor can switch camera angles and cut out the bad portion of the sentence. However, it is a good idea to go ahead and repeat that sentence to capture the best sounding sound bite. If you were only shooting with one camera and the interviewee stumbled through a sentence you would need to have them start over from the beginning of the question being asked. This will add time to them being in front of the camera and might cause them frustration and embarrassment. With two cameras you could just have them repeat the sentence and then move on quickly. 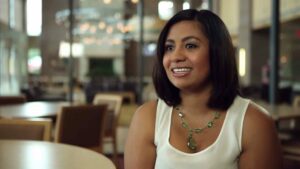 Tips for Shooting With Two Cameras

Frozen Fire is an expert at filming interviews. Here are a few tips we use on a constant basis.

The positions of the cameras are very important. You’ll want to setup the cameras far enough apart so they are not in the way of each other. This will give the secondary shot a slightly different background than the master, but it will be similar enough to let the viewer know they are in the same room.

A slider is a handy tool that will boost production value significantly. Sliders are typically used on the secondary shot to add movement to the interview. Sliders can also be used for stunning b-roll.

When filming interviews you’ll want to reserve a large-size room so that you can get a good depth of field. You might have to light the background a bit, but you will be rewarded with gives the video a sharp and neat look for your interviews.

Want to see an example of a two camera interview? Check out the interviews we filmed for Southern Methodist University and Contact Frozen Fire to get started with next video project!

Frozen Fire is a digital business development and communication strategy firm that exists so that businesses have the tools necessary to know exactly who their customers are and what their customers are looking for; we help companies connect with their customers via digital marketing strategies; and we help them to drive their sales, business development and marketing efforts, so as to gain the maximum return on their investments in terms of marketing dollars, efforts, and human resources. Contact us to learn how we can help your business know, connect, drive.

SEE THE REST OF OUR WORK

TELL US ABOUT YOUR PROJECT

Want to know more about video pricing. Check out our article here.